"299 Days": A Realistic & Plausible View Into A Future Collapse 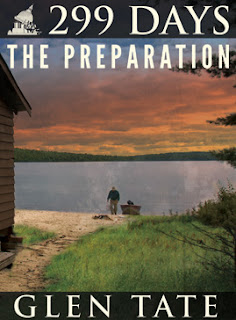 Well, as a fan of all things relating to self-sufficiency, survival, patriot related topics, firearms and the preservation of our right to bear them, I am always looking for new reading material relating to these subjects, whether they be fiction or non-fiction. Recently, a good friend of mine and member of the PG&G team (all two of us) Glen Tate, penned a series of novels chronicling a possible future collapse of our system,the fall out from such an event, and the effects of it on the lives of the people of the once-United States. I was honored to be one of the first to actually read the novels, in it's draft form, and even with the rough edges it has drawn me in with it's compelling and gritty story, it's believable characters, and it's overall message of self sufficiency. I think the summery of the story from the official website describes it best:
"The 299 Days series, published by Prepper Press and written by Glen Tate, is a ten-book novel about the collapse of the United States. In it, the main character, Grant Matson, has a job that allows him to see what’s wrong with government. He realizes he needs to prepare for what’s coming and he does so. His wife, Lisa, is reluctant to prepare because she thinks things are just fine. When the civil unrest and political collapse hit in a dramatic way, it is undeniable that they need to leave their Olympia, Washington home and head to their cabin. But, Lisa is still reluctant; she desperately wants things to remain “normal.” Out at the cabin, a collection of amazing–yet real–people assemble. They create their own community because the government isn’t functioning in their area. They have to work together and, as a community, they manage to achieve some impressive results. Unlike most prepper stories, in 299 Days America suffers a partial collapse. The utilities stay one (due to a spell-binding plot twist) and the government functions in larger cities. People in rural areas still get some food and services from the government, but must increasingly rely on themselves. There are no zombies or cannibalism; 299 Days describes a much more likely partial collapse scenario. Grant’s friends, who work in government, describe how things continue to go down hill in the city and how the government is trying to maintain control. They describe exactly why the government, as big and powerful as it once was, cannot control things. Many in the military and law enforcement step in to stop the bad things; others in the military and law enforcement perpetuate the bad things. After a while out at the cabin, some important visitors arrive and present Grant with a difficult choice. Eventually, the Patriots–the side Grant is on–are forced to take on what’s left of the former government. There is a huge battle. In the end, Grant has an important job at the beginning of the rebuilding."
"299 Days" isn't your typical " civil unrest/collapse of society" fiction, no nuclear explosions, no EMPs, no zombies, not even a teensy little asteroid to be found in the entire series. No, Glen gives us a far more realistic and terrifying threat: Ourselves. There is nothing more deadly to the human race, than humanity. It's a sober real look at what happens when a government and a society has stretched itself too thin and allowed it's arrogance and decadence to overshadow it's principles and it's morals. As the Collapse takes place in the story, Man practices his fine art of self destruction, as his hand made god, the State, struggles to keep a firm grip on the people; by coercion,by brute force, by any means that it has. The characters are believable, as they should be. The protagonists are the kind of people you want to be friends and allies with, while the villains, and I do mean villains , will make you want to bash a skull in with rage. That's what I want a novel to do, make me believe in characters to the point that I am lost in the story. And 299 Days does just that. I will not give any spoilers away, and I don't want to delve into the story too much, until the book is widely available. Read "299 Days". In my humble opinion, it's about as real as a SHTF novel gets. ( I am in no way biased due to the fact that Glen is an awesome human being, a good friend, or that he may or may not have included me in his fine cast of characters. wink wink) P.S. If you register at the official website, you will receive bonus chapters that Glen has written to enhance certain aspects of the story.
The Official Website: http://299days.com/
Also check it out on facbook: http://www.facebook.com/pages/299-Days-the-book/230715697015924
Posted by The Black Dog at 9:48 PM